Back to Basics: Investing in Emerging Market Debt

Even if an investor decides on emerging market exposure, they then have the task of what type of working out what kind of exposure is best. Passive versus active funds, local currency versus hard currency, equity versus debt. They are all vastly different and require an investor to think about the risk of a currency shock as well as the level of return you would want for that level of risk.

This is best thought about in the development and progression of a country. A farmer-oriented populace, for example, Uganda or Laos, will have a harder time finding investors for their debt than a maturing one such as China. This means Uganda is far more likely to issue debt in US dollars, as they want to attract foreign investors who demand a stable currency, whereas China have the luxury of issuing in Chinese yuan.

The problem with the hard – US dollar – versus local currency dilemma is that we cannot compare apples with apples. We cannot simply say that a 3.5% loan in Chinese yuan is more valuable than a 3.2% loan made in US dollars, because this fails to account for many variables such as China’s ability to inflate their way out of local debt or the differing likelihood of default. We also cannot compare the hard currency basket with the local currency basket because the country composition underlying the baskets are vastly different.

A practical way of thinking about this is the Argentinian crisis of 2002, as Argentina was mostly issuing in US dollars. As inflation caused the Argentinian Peso to fall, the actual cost of the US dollar loan went up and eventually caused a default. This was very different to Russia’s 1998 crisis, where they maintained both local and hard currency debt along with an abnormally high fixed exchange rate, and in the midst of the Asian crisis Russia ended up having to default on their local currency debt whilst declaring a moratorium on foreign debt.

Therefore, the purpose of the story is that they are two different beasts, and need to be treated as such. Local currency debt requires additional scrutiny of pillars such as country debt levels, socioeconomic status, monetary policy changes, and much more, that aren’t quite as important to a US dollar denominated investor. For this reason, Morningstar advocates two-level thinking on emerging market debt because it is the only viable manner to understand the risks and opportunities.

Ways to Value Emerging Market Debt in US Dollars

In our view, an emerging market bond priced in US dollars has more in common with a United States corporate of the same risk profile than it does with the equivalent local currency debt. For example, a BBB-rated emerging market bond tends to have very similar pricing to a BBB-rated United States corporates – all else being equal – which can vary wildly from a local currency issue of the same kind.

This provides a great platform to compare an unfamiliar asset with something much more familiar. We have observed this pattern generally across more than 30 tested markets, and the relationship tends to hold true in the majority of instances.

This allows us to view any divergence as an opportunity as opposed to a threat. What we tend to find is the blue line and the red line, depicted as the spread to the “risk-free” rate of United States Treasuries, remain roughly in line over the long-term, but can vary in the short-term. 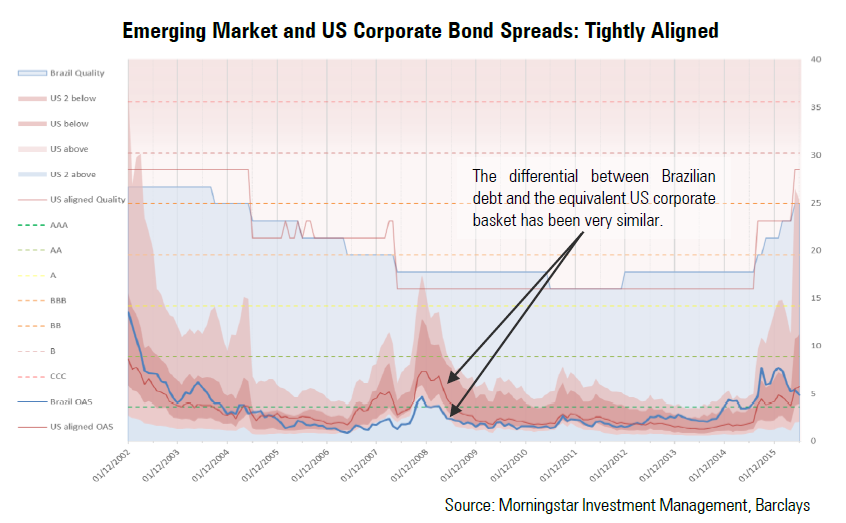 Therefore, if the ratings agencies can be trusted in their ability to capture default risks in their ratings, which we think they generally can be, then we have a great comparative that can be used to identify mispricing.

In its simplest terms, if the yield on emerging market debt is greater than its equivalent United States corporate debt, then we would have a tendency to prefer emerging market debt as long as we are comfortable with the rating being assigned. The same applies in reverse.