Why Bogle was the Best CEO 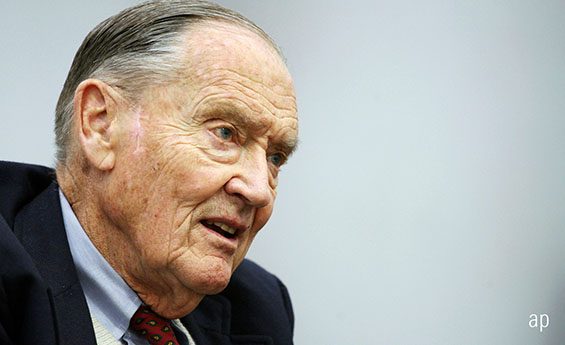 Bogle was the best chief executive officer in fund history, and second place isn’t even close. He began in the right place: attempting to create top-notch products. That advice sound obvious, but in the ’70s it was not. Many leading mutual fund companies offered mediocre funds.

The general belief was that “funds are sold, not bought,” and that what mattered for business success was distribution power and brand recognition. Strong fund returns were useful but not strictly necessary.

This condition persisted through the ’90s but has since expired. The Internet applied the final blow. Mutual funds, and their offshoots, exchange-traded funds, were already the most closely measured of consumer purchases. Marketers could talk vaguely about their automobiles’ superiority or their diet pills’ benefits, and prospective buyers would have difficulty distinguishing between fact and fiction. Not so with funds. Their attributes could be scored and–during the Internet age–easily obtained.

Bogle did not foresee the Internet–a technologist he was not (it was only last year that I first received an email from him directly, not dictated to an assistant, and it came via a BlackBerry), but he did expect that the truth would emerge. He believed that if Vanguard’s funds treated their shareholders better than did other companies’ funds, the marketplace would recognise that achievement, although it might take a long while. He was correct; most other fund company CEOs were not.

Hoping to build fine products is only half the task. The other half is doing it. Bogle excelled there, too. Over the decades, Vanguard’s funds were consistently very good, sometimes outstanding, and only rarely poor. Its offerings were among the industry’s most reliable.

The primary reason for the funds’ success, of course, was their lower expense ratios. If Vanguard charged 0.3% per year for an actively managed stock fund, while its competitors levied 1%, then those rival funds’ managers needed to be 70 basis points smarter than Vanguard’s. Eternally.

How could that be? Vanguard hired subadvisors from the same pool of investment managers who ran mutual funds. Its funds’ gross returns were highly likely to resemble the group’s average, with their net returns therefore being higher.

That is what occurred. What’s more, Bogle astutely minimised the possibility of bad luck by hedging his portfolio-management bets. Rather than use a single subadvisor for a Vanguard stock fund, he began to hire multiple advisors. The more advisors he brought aboard, the more he muted the fund’s relative risk. Increasingly, the fund would behave as did the collective–before expenses. It would therefore outdo them after costs.

Investment pundits sometimes complain that a portfolio is “overdiversified,” by which they mean that it won’t beat an index by much, if it all, because of the law of large numbers. The aggregate pulls the outliers toward the middle. This is true.

However, as Bogle recognised, that precept works in both directions. There are limits to how well most of Vanguard’s actively managed funds can perform in a given year–but also limits to how far they can lag the category averages. Vanguard was built to avoid errors.

Over time, the bulk of Vanguard’s funds delivered on their promises.

Crafting a different strategy than competitors and having that strategy succeed was two thirds of the battle – and enough to cement Bogle’s legacy as the person who, by far, most benefited the retail fund investor. From the CEO’s perspective, however, the mission was not yet complete. The marketplace would ultimately reward Vanguard’s funds with new assets if their performance was superior. But, as CEO, Bogle’s task was to speed the process.

The way to get the word out was not immediately obvious. Because of Vanguard’s unique corporate structure, it could not sell in the early years through financial advisors because it could not charge sales fees. It was also limited in its ability to advertise. How to reach investors while being shut out of the industry’s primary distribution channel and unable to forge a national brand through advertising?

The answer was unprecedented and something Vanguard’s rivals never envisioned. He became his company’s walking, talking sponsor.

Bogle’s missions drove rival fund-company executives batty. There were dozens of them and one of him. They had small armies of public-relations executives, not to mention star portfolio managers whom they could make available; he was just Jack, with a couple of research assistants. Yet somehow, and increasingly so over time, the investment articles were fuelled by Bogle’s ideas, not theirs. The press became Jack Bogle’s megaphone.

Bogle’s specific decisions are not useful guides for today’s fund company leaders. Conditions have changed. The dominant firms in the fund industry are very different from those of the ’70s, when Vanguard was formed. But the principles, I think, are similar. A great fund company CEO is one who: 1) aims high when developing funds; 2) succeeds in that goal; and 3) tirelessly, and effectively, spreads the word.

Nobody did it better than Jack Bogle.